Will not be providing any food this season as they have been let down by the person who would be supplying it.

They apologies and do not expect to be offered food at their away games. 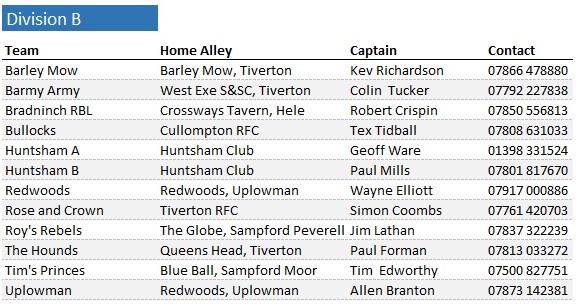 Updates for Division A teams ….

The fixture files have been updated to reflect these changes.

…..  that Castaways will no longer be playing at the Barley Mow, Rockwell Green.  Their new alley will be …

Fixture files will be reissued during week commencing 20th September 2021.

Also, Globetrotters are not able to offer food at their venue.

Fixtures for the upcoming season are now available on the Fixtures page.

At last …. we’re almost ready to start another season.

It’s been a long time coming, but preparations are well underway to start the 2021/22 season.  It looks like we’ll be able to run three 12 team divisions and for this season there won’t be a cup competition.

Which teams play in which divisions?  We know it’ll be impossible to please everyone with the arrangements we make here, but bear in mind that there isn’t a single perfect solution.  What we’ve decided to do is take the last published league tables, list all teams in order from Division A to C, then take the top 12 for Division A, the next 12 for Division B and the remainder for C.

Signing-Up.  We’ll email captains with relevant details.  This will be the usual sign-up form, including details of how to make a bank transfer payment.  We will also have a sign-up night in the Canal Room at The Globe Inn, Sampford Peverell on Wednesday 25th August 2021 between 7pm and 9pm, where we’ll be able to receive completed forms, plus Team and Player registration fees.

Player and Team Fees.  We didn’t incur all the expenses that we would have expected in the last season before the pandemic and for that reason, player fees will be just £3 per person.  The Team registration fee will remain at £15.

Fixture Books.  We won’t be producing a booklet with fixtures like we’ve previously done.  We will be providing a single sheet showing all fixtures and venues which will be supplied to captains and will also be available for download from the website (we did this in the previous season and it proved quite popular as it saves having to lookup teams and venues against numbers).

Team Names and Alleys.  Because a number of teams will be relocating, a change of alley and team name will be allowed without the need for committee approval.

AGM.  We haven’t been able to hold an AGM, where we’d usually elect the committee and approve the accounts, as well as deal with any matters arising.  In these unique circumstances we’ve been as practical as possible in making arrangements that mean we can continue with the league this season.  We will hold an AGM at the end of the season.  In the meantime we will email captains a copy of the league’s accounts and if anyone wants to join the committee, please get in touch.

… today (11th March 2020) was the last time league games were played. Congratulations to all teams who have now gone a whole year unbeaten and commiserations to everyone who is still waiting for a win after such a long time.

The current plan is to get back to playing at the end of the summer, but who knows whether we’ll be allowed inside pubs by then and what restrictions there may or may not be.

In the meantime we’re keeping positive about playing again as soon as we can.

We’d hoped to be able to run some kind of mini-league in the new year, but with the current restrictions and not knowing when they’ll end, it’s proved impossible to plan anything.

Hopefully 2021 will bring us the opportunity to get back to playing again and we very much look forward to being able to resume business as usual for the 2021/22 season.

Season’s greetings to everyone from us all at league HQ.

We’ve reluctantly had to make the decision to cancel the 2020/21 season.

We know this will be a disappointment to many people, but it had become clear that a lot of skittlers are not keen or able to play at the moment because of concerns around the Covid virus. There are also issues with some venues, specifically around being able to socially distance in small spaces.

We’ll review the situation towards the end of the year to see if we’re able to run a mini-league in early 2021 for any teams wanting to take part.